Our Story Part I

This is the journey of how I came to be with my loving husband named Bren=)
Like many good stories this one starts with a prophecy.

It was during spring break of my first year(March 2008) at MSM( Morningstar School of Ministry) that I was walking along the beach with my sweet Momma. She says, "I think you are going to meet your husband in the next 6 months, he is going to have a good sense of humor, and be unlike anyone you have ever met. Is that a prophetic word, if it just comes to you like that?"
I said, "Maybe, Momma, we shall see."

I can't really say this was in the forefront of my thinking, I was quite busy at school, and I had already met some high caliber gentlemen at Morningstar, so I figured there was a possibility to meet the guy I have been waiting for=)

6 Months later!!!!!!
In August 2008 met this new first year student J.C. and thought he was pretty awesome! And he had a friend S.D. that wanted to go to the Call in Washington D.C. on 8/14or 16?/2008, so we decided to go up together with my friend L.K. Then my other friend J.Y. said he had a friend named Bren that wanted to go too, so I said,"Sure, that would be great." I was told he would be at MS the next day for Todd Bentley's 8/8/08 meeting, so J.Y. Gave me a brief description of his appearance so I could keep an eye out.

I was very excited on 8/8/08 because there were so many new people to meet (of of course lots of miracles-yea God)!!!! Whoo hoo! Needless to say I didn't see Bren all day(it was kind of like a festival with lots of people). But when it was over I went to talk to J.C. and walked with him to my car in the far back parking lot, and ours are the only 2 left. As we are chatting by the cars a young man walks out from the shadows of the trees. J.C. introduces him to me as Bren. I was super excited since he was going on the trip with us and I gave him a BIG hug and he says I held his face in my hands for a moment when he told me he was planning to be a MSU student(not a typo, the school changed names=). He thought, "Wow she is friendly". And when he got into the car he said to himself, "I want to marry her." And then thought- you don't even know her! And he shut down his heart from thinking those things.
I didn't have ANY sort of sense of indication at this point that this was the person I was going to marry. 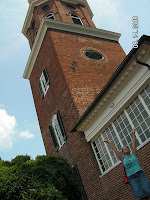 We left a couple days later for Washington, DC: J.C., S.D., L.K., Bren and me. Bren was squished in the back between L.K. and me=) He he, ah, so funny. We had a fun time and I noted that Bren was a great listener and quite serious. (Now if you have ever been to a Call- they are quite serious events of prayer- to his credit) I just wasn't in that mode. We visited Alexandria, VA and I loved seeing the Church where George Washington worshiped, such a beautiful town. 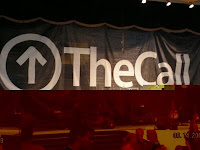 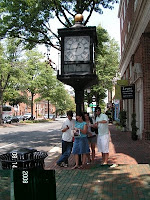 What I noted about Bren during this period was his prayerfulness and seriousness. (Note: I am not the most serious person you have ever met...;) The funny thing is that when I met his middle brother W.E. at the Pre-Call. I had this immediate impression that he was my brother. I felt automatic comradeship... and he felt the same! (Thought it had to do with the Body of Christ deal, didn't realize he would actually be my brother=)

I also met Bren's mother (her name is the derivative of my mom's name=) for a NYMinute at the Call and didn't sense anything about her being my future Momma -in-law=) Bren went home with his family to New England and I went back to SC with JC, SD, and LK...

Side Note: Some of you at this point may have picked up and be wondering... if your Mom said he had a good sense of humor, then why is he so serious? - Well, you are just gonna have to wait;)
Read Part II
Posted by AmberJoyful at 10:02 AM